Well, here I am in Sydney.

I've been here for just over a week and have another four weeks to go  -  attending the precious Lam Dre teaching, given by His Holiness Sakya Trizin, at the invitation of the Drogmi Retreat Centre, Sydney. This Lam Dre teaching is rare and this is only the third time it has been given in Australia. It encapsulates core Sakya philosophy and secret practices that result in the realisation of the indivisibility of Samsara and Nirvana - the Ultimate View of how things are. His Holiness is the supreme head of the Sakya tradition, one of the four main schools of Tibetan Buddhism and is the 'guru of many gurus', as the heads of all the other Tibetan schools have received empowerments from him. The Khon family, of which he is the current patriarch, is the world's oldest unbroken spiritual dynasty, dating back to the 11th century and His Holiness is considered to be an emanation of of both Manjushri and of Padmasambhava. This the year of his Golden Jubilee and after this teaching, here in Sydney, he will be travelling around Australia, giving teachings till July 11 - when he gets back to Sydney, before returning to his base in India.

Apart from being privileged to receive this teaching, and accompanying empowerments, I am feeling particularly excited today at hearing that H.H. Sakya Trizin has agreed to be interviewed by me - for the purpose of posting the recorded interview on East West Wisdoms. So wait for it...it will be coming to you, free, as soon as we get back home to organise the necessary technical details!

But that's not all! His Holiness is accompanied on this visit to Australia by his two sons, His Eminence Ratna Vajra Rinpoche and His Eminence Gyana Vajra Rinpoche. Her Eminence Jetsun Kushok Rinpoche is Sakya Trizin's older sister and she has flown here from Vancouver, where she normally lives and teaches. She is regarded as the most highly realised female teacher in Tibetan Buddhism today and is spoken of as an emanation of Vajrayogini. I have put out invitations to these three very special beings, asking that they, too, kindly agree to be interviewed so that their words can be posted on East West Wisdoms. So, fingers crossed, I'm waiting for their respones....

The Lam Dre teaching is being held at the Balmain Town Hall, in this attractive inner Sydney suburb. Amongst the moving opening ceremonies was an inspiring indigenous 'Welcome To Country' by Michael West and a welcoming speech by the "Green" Mayor of Balmain. It was very pleasing, and somehow fitting to know that the locality has a green leaning! Here is a photograph we took showing one view of the splendid transformation of the hall for this special Buddhist teaching: 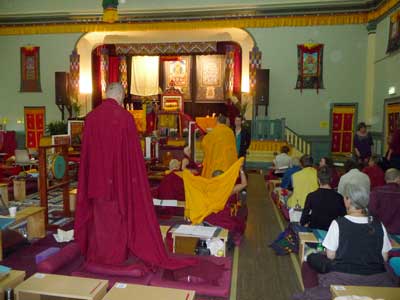 Settling down for the Lam Dre teaching

So, that's all for now. I have to go and meditate!

I'd be really interested to hear if you have any interest in these planned interviews, or to hear any other comments you might have.