This morning I have been struck by three bright experiences that I want to share with you. The first arrived when sitting in meditation, 'trying' to "become like a rainbow!" A rainbow-like experience arises briefly but is quickly followed by sensory observations and fleeting thoughts. I remember the instruction: "Just allow whatever is there to be there". In other words, "be aware!" Gradually as I drop the struggle to stop thoughts and be a rainbow, the thoughts and sensory read-outs do move to the background and a sense of clarity and spaciousness arises. The focus is on 'allowing' and brightening awareness of what is.

My second experience came sipping my coffee after a quiet breakfast, sitting alone on the deck of my house, overlooking grass, trees and water as I contemplated the flow of cause and effect described in the TV documentary "Crude"[oil] that my husband and I had watched last night. Inspired  by the wondrous, continually dissolving and re-forming, colourful visuals of the documentary, I experienced the history of earth - formed predominantly by the combinations of carbon, oxygen and hydrogen - as the interdependence of all beings and all phenomena. 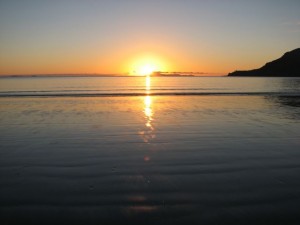 The documentary (as I understood and summarised it) traced the history of oil as the energy of the sun captured in the plants that sank to the ocean's depths to form a plankton graveyard. During the Jurassic period of the dinosaurs the excessive clouds of carbon dioxide led to dramatic climate change and super greenhouse-increased temperatures, humidity and flooding. The dead material washed into the ocean depths was then 'cooked' by  pressure into oil or gas. As the changed conditions burned the vegetation and killed other life forms, the overheated oceans were deprived of oxygen and became dead, stagnant graveyards that locked up the excessive carbon as oil and gas, eventually resulting in temperatures dropping, until mankind discovered this amazing source of energy and released it back into the environment.

Driven by greed and blinded through lack of awareness, our excessive use of oil in all its many discovered forms has dangerously effected our climate and the health of air, earth and water.  So round and round we go as our actions change the conditions and the conditions influence our actions. In other words, the flow of karma shapes the samsaric world!

And so I come to my third 'experience' of this morning. This time I am struck by some wise teaching I have read in the current version of Buddhadharma in which Glenn Wallis quotes the following sutra by Siddhartha Gautama on 'Destination': 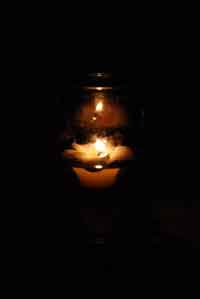 Now to my mind this is a very clear instruction by the Buddha on why the increased awareness promoted in meditation practice leads to the reduction of suffering and brings you to the destination of Nirvana. If we look at the grand story of oil and the history of planet earth, we can see how infatuation (or greed, desire and passion) for what oil appears to give us has blinded us to the negative consequences of our overuse of this 'liquid gold' and even now, as many eyes open to see the dangers, infatuation for wealth and convenience  stops us from taking the steps that may prevent threatened catastrophe.

On the micro level, this teaching is a great reassurance and a guide to me on how to relate to my meditation practice. It reminds me that the purpose of my sitting mindfully, with clear awareness, is to notice what arises and let it go. Notice the body states, the mind states and the impulses and let them go, thus undermining the habits of infatuation/desire, hostility and grasping at the delusion of a separate self.

So there you have it: the three bright thoughts that have moved me this beautiful, sunny morning. Perhaps you can think of some bright experiences of the last twenty-four hours?