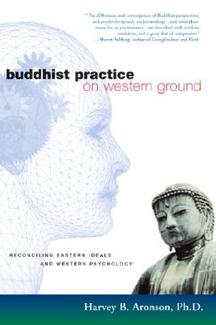 Buddhist Practice on Western Ground by Harvey B. Aronson, PhD

This book is particularly useful for longer term meditators, Buddhist teachers and psychotherapists interested in exploring the usefulness of integrating Buddhist psychology into their practice. It is a scholarly book but very readable. I don't think it is particularly suitable for beginners as there is an implicit assumption of some background knowledge of Buddhist philosophy and psychology and key Western psychotherapeutic assumptions and practices.

T
he most outstanding quality of 'Buddhist Practice on Western Ground' is the clear and profound identification of cultural differences and their significance, between teachers with traditional Asian assumptions about interdependence and social obligations and students from western cultures where the emphasis is on individuality and the desirability of freely expressing emotions and personal views. Aronson focuses on North American cultural values and the difficulties that North American meditators often experience in integrating apparent conflicts with some of the tenets of traditional Buddhist teachings but he also refers to Japanese, Indian, Tibetan, Chinese and other Asian cultural constructions.

H
e discusses in some detail how the different cultures have shaped conflicting instructions on such issues as how to view the self, or ego; whether to abandon or express anger; whether to encourage or discourage attachment and whether to focus on the content or the process of the mind when meditating. I was particularly struck by his observation of how so many western students tend to use meditation as a kind of self-therapy in which they can engage in psychological self-reflection of thoughts, feelings, fantasies and memories in the hope of encouraging insights. As he says, this is indeed very useful for working through specific life issues and increasing awareness of dominant thought and feeling patterns but it is important to include attention to the process of what is going on.

H
e says "As we meditate, we constantly face the choice between following personally meaningful thoughts and emotions and pursuing the unique insights of Buddhist practice developed through mindfulness--content versus process. The particular value that psychological self-reflection has in our milieu is hard for many Asian teachers to appreciate, and it is therefore difficult for them to acknowledge and clarify the difficulties in making this choice". (Aronson, 2004, p.43) On the other hand, he explains in some detail the great benefit gained from increasing our awareness of the process, rather than the content, of mind, showing how such awareness leads to insights on impermanence and no inherent self.

A
s a well informed and experienced meditation teacher and psychotherapist, Aronson goes deep in his discussion of the many misunderstandings that can unknowingly arise between teachers and students, where each come from very different cultural backgrounds. For example, he reviews at some depth the reasons for the Western psychological emphasis on the importance of attachment in early childhood, in order to be able to connect with others and experience a sufficient sense of safety to encourage exploration. He then contrasts this highlighting of the benefits of attachment (and the type of suffering involved in poor attachment experience) with the common Buddhist warnings against attachment. In essence, he clarifies how the Buddhist warnings are based on the suffering arising from clinging to persons and objects as separate, inherent entities and a loving parent/child relationship is assumed.

S
ronson gives many other illuminating examples of the confusion that can arise when the same word is used but from different perspectives, based on different cultural conditions and meanings. He draws on his considerable experience as a meditation teacher to describe how misunderstandings on behalf of both teacher and student are often unrecognised and can sometimes even damage the student's development and wellbeing.

H
n summary, I strongly recommend 'Buddhist Practice on Western Ground' to meditation teachers, from the East and from the West, to practitioners of Buddhist psychotherapy and to all engaged meditators, wherever they may be. Culture shapes us all and often we cannot see how it is influencing our perceptions of what we hear and what we do. This book raises our awareness of these processes.