The wonderful, playful, purifying, connecting festival of Songkran has just run its course in Thailand. For three days, between April 13 and 15, the whole nation - and its visitors - perform a ritual dance of purification and connection as they welcome in the new year.

In the words of my reporting daughter, rapturously enjoying this dance of togetherness:

"The name Songkran comes from the Sanskrit meaning ‘passing’ or ‘approaching’ and is celebrated in Thailand as the traditional New years day (actually running over three days from the 13th-15th of April) and coincides with many New year calendars across asia. This is a time of national holiday where all work stops and a giant play ground and free-for- all of mischief and mayhem is created. Using water guns, buckets, hoses, trucks and whatever else the imagination might conjure, the entire nation (as well as many internationals) comes to the streets to drench each other in an endless supply of water. Streets are closed with giant concerts and dance parties filling the city and thousands of smaller celebrations speckled throughout all the back alleys and expanding outwards beyond the old city walls. Many Thai’s will also carry small bowel’s of beige coloured talc which they mix with water and smear on the faces of random passerby’s as a blessing for the new year. Despite appearances, rather than having intention to fight, this throwing of water is a way of showing respect to people, used as a way to bless and be blessed by others as all are cleansed and renewed as one". What I find particularly interesting is her observation of how the appearance of hardness in the faces of the people absorbed in busy city life before the festival, dissolved into joyous smiles and fun-filled spontaneity as they entered the spirit of Songkran. As she describes it in her blog on http://poppylikestodance.tumblr.com/:

"I had noted the significant lack of smiles and sensed a hardness to the people here. But as the festival began, through this simple act of throwing water, I saw it all crack open before me to reveal a soft, open childish joy which poured out of every being on every street. Never in my life have I seen so many smiles, nor heard so many squeals of delight. The water had worked like a country wide tidal wave of joy which smashed down all the walls of separation and time so that now both the young and the old, the rich and the poor, the local and the foreign, the monks and the lay people; where all one". 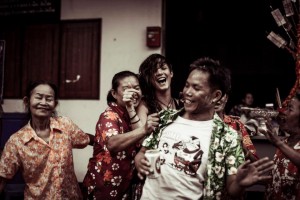 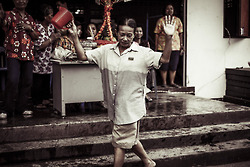 Perhaps more countries could institute a festival like this to help people rejoice and renew as they realise they are not alone. Not separate individuals but an expression of a limitless, dynamic, every-changing 'whole'. Might this be one small step to reduce the sense of alienation and isolation that blights so many in our wealthy countries of the West?

And so for those of you who would like a full description and a look at more of Pippa's photographs, you can go to her blog at http://poppylikestodance.tumblr.com/