We were all set for our first train journey in India, from Delhi to Amritsar, loaded up with rucksacks and filled with anticipation, when we were hijacked near the entrance to our platform. A man we thought was a ticket inspector insisted we needed a boarding pass to accompany the e-tickets we showed  him. He declared we could not board the train without a boarding pass and we would be fined $190 each if we tried to! To cut a long story short, there was much animated talking on mobiles and replacement of one "official" after another, each presented as more senior and determined to help us.

So we found ourselves whisked off in a taxi with No 3 man to an office presented as The International Tourist Office, where the delightfully sympathetic and friendly 4th man managed to persuade us - with the help of a computer screen we couldn't quite read the data off - that all seats in first, second and third class were booked for the next few days. Similarly, we were handed a phone where the supposed bus company told us the buses were all booked out! The only proferred solution was a very, very expensive taxi and an eight hour drive.

Finally, in our desperation to get to Amritsar and our pre-booked hotel, we agreed to the private car. It then took another hour or so before we realised we had been duped. Stung! Taken for a ride!

But it had all been done so nicely (the beautiful in the unbeautiful) and so skilfully. They played the helpful part so beautifully and with such charm and smiles and cups of tea. We thanked each one profusely and only No 4 man in the supposed tourist office appeared a little uneasy at our thanks, protesting "don't thank me. I see you as my parents!" I wonder now, is that really how he would treat his parents...

But the aspect of this experience that I find most interesting is that we never lost our equanimity, even once we saw how we had been tricked out of our train ride and our money. Instead of anger, we found ourselves contemplating how thoroughly conditioned we were to believing people who appeared official. Indeed, both my husband, Alan, and I have a strong bias towards believing anyone who seems to be treating us with respect and doesn't sound hostile. So we were sitting ducks and oh so grateful for the apparent help.

What is satisfying to notice about our experience is that we really were able to see the beautiful in the unbeautiful. We admired their skill and were grateful for the lack of any apparent ill will from them, or from us. What we still remember are all the smiles and the attitude of helping us out of a [constructed] difficulty. We remembered that we could choose how to react and what stories to run through, introspectively and to each other, on that very long eight hour journey. We each knew that keeping our focus on the beautiful would keep us happy and support our equanimity. And so it did!

And even as we contemplated how it was that we were now driving rather than sitting back in our booked first class train carriage, the view from our window gave ample opportunity to further reflect on the beautiful in the unbeautiful and the unbeautiful in the beautiful. The road was shared by military vehicles of all types, numerous multi-coloured trucks, modern cars, tuk-tuks, rickshaws and bicycles and the view constantly changed from beautiful temples to tent cities of plastic and sacks; flat, sun-dried, barren land to lush reticulated crops and green trees. So many different vehicles and different sights to see Future posts will, I hope, have more exciting photos than these but you can imagine my difficulties taking photos with a slow camera on a bumpy road, sitting in the back seat of the car. These do at least make the point!

So just to further contemplate the dharmas of impermanence and consequent uncertainty about what is to be found in present and future experience, I will throw in today's contrasting example of outstanding beauty and devotional intensity experienced during our morning visit to the Golden Temple of the glorious Sikh tradition. It was one of those very particular, very strong, emotional and spiritual experiences. PS for Alan's version of events see his blog here. 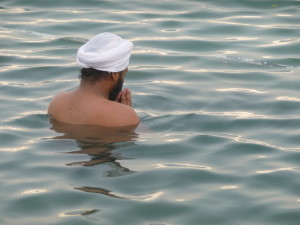 6 responses to “From time to time, it is useful to see the beautiful in the unbeautiful...(said Buddha)”