Jacqui's interview with HE Ghyana Vajra, Sydney May 2009. 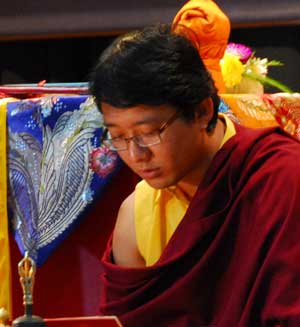 This interview is with His Eminence, Ghyana Vajra Rinpoche of the Sakya Tradition, one of the four main schools of Tibetan Buddhism. His Eminence is the youngest son of His Holiness the Sakya Trizin, now living at the Sakya Centre in India and currently initiating new and expanded educational opportunities for young monks attending the Sakya Academy, of which he is a founding member.

Amongst many interesting topics, H.E. Ghyana Vajra Rinpoche talks about the development of faith in the children living in traditional Buddhist communities; the changes he is making in the education of young monks at Sakya Academy project; the influence of culture on the process of asking questions in a public teaching forum; the commitments attached to empowerments; the qualities associated with sacred languages and some difficulties associated with translations into the languages of Western countries. He claims that there is nothing new or particularly challenging about such social problems as drug abuse and social isolation and dislocation that is often associated with Western capitalist influences and rapid technological developments and notes how the faith and spiritual understandings of young Tibetans living around the world is growing, largely as a result of improved education.

... More about HE Ghyana Vajra Rinpoche