Ian Gawler talks with Jacqui about the healing power of mindfulness meditation. 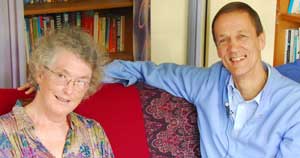 As a young veterinary surgeon and athlete, Ian developed bone cancer (osteogenic sarcoma). His leg was amputated in 1975. Later that year the cancer returned and at one point, Ian was expected to live for only a few weeks. Ian then developed an effective self-help program with key principles: Good food, positive attitudes, meditation and loving support. Not content with just surviving, Ian began to share these principles with others and now, since recently retiring from a lead role in The Gawler Foundation, he continues his commitment to help others by focussing on teaching meditation and studying mindscience.

In this (1 hour 18 minute) interview, Ian Gawler describes how meditation has been the key to his own healing and is central to the self help techniques he has developed in his group work and inspirational speaking in Australia and overseas, as well as forming the backbone of the books he has written. He outlines the process and benefits of relaxing the body and calming the mind, particularly when living a stressful lifestyle or undergoing the stress and fear of serious illness. He describes his own experience and the more general learning of how the clarity of mind gained in meditation promotes access to the inner wisdom that "knows", versus the confusion of "ordinary" mind.

Ian speaks candidly of how he faced his death in his twenties and how he continues to contemplate the inevitability of death and how acceptance of death and impermanence can invigorate one's life. He describes his lifelong interest in meditation and the discovery of psychiatrist, Ainslea Meares, who believed in the healing power of meditation and was able to teach him how to do it. He reviews how a number of significant losses early in his life encouraged his interest in a spiritual life that began with Christianity and led into a deep interest in Buddha Dharma, meditation and the broad field of mindscience. He shares the story of his spiritual development in some detail and in a way that supports our own exploration of spirituality, devotion and commitment.

In summary, Ian talks in considerable depth about his personal experience of remarkable recovery from a supposedly incurable condition and juxtaposes this individual experience with his learning of what seems to help, or cause more suffering, for the many people he has helped face loss, death and dying. He balances his insights and stories with some clear descriptions of the nature of mind and distinguishes between the spiritual aspects of meditation and the relaxing, healing qualities of meditation.