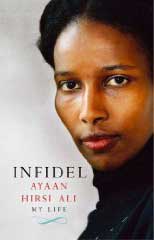 I've chosen to talk about this book because of what it has taught me about the process and consequences of religious indoctrination. Although the focus here is on fundamentalist examples of Muslim faith and its explicit instructions on female rights and behaviours, I believe its lessons on the conditioning process and power of indoctrination are applicable to all fundamentalist religious societies.

I
t is now nearly two years since I first read this book. The story of Ayaan Hirsi Ali's spiritual development and political life as she began questioning the traditional Muslim teachings and social guidelines on gender relations and practices, particularly for women, that she had grown up with, remains one of the most moving autobiographies I have read. Growing up in Somalia, Ethiopa, Saudi Arabia and Kenya, she gives a vivid and full description of life as a dependent female held in the proud but firm embrace of the great Somalian clan of the Darod as war forced her family from positions of power to struggling refugee status.

I
really like a good story: a story that pulls you into the plot, or life in question; is easy to read, and also expands one's knowledge of an historical time, or place, or subject. Ayaan Hirsi Ali is described as one of today's most admired and controversial political figures as she burst onto the international political scene. As a member of the Dutch parliament speaking up for the rights of Muslim women and the reform of Islam, she evoked violent reactions from reactionary Islamists, some of whom threatened her life and organized the killing of the Dutch film maker who had dared to collaborate with her to make a film highlighting female oppression.

H
owever, for me, her great gift in sharing her story is to help me develop a greater understanding of the power and workings of early childhood conditioning in shaping religious and political belief, so that children and adults can be trained to willingly accept beliefs and structures that are clearly not in their interests.

A
yaan writes beautifully and passionately and I found myself swept along eagerly with her as she vividly painted the swiftly changing scenery and dramatic events of her life from early to later childhood, teenage and young adult years in the shadow of war, poverty, dictatorships and the rise of the radical Muslim Brotherhood. Because her father's prime commitment was to his clan and fighting for political power in war torn Somalia and Ethiopia, he moved his wife and children to presumed safety in neighboring countries but failed to provide adequate financial or emotional support. He left them unprotected by the masculine presence deemed so important in her culture. Ayaan's story therefore covers the challenges of living as a refugee, largely dependent on clan members' charity, with a deeply unhappy, angry and violent mother, as well as having to learn a series of different languages and customs and find ways of fitting in to schools and communities in these four very different countries.

S
he describes in detail her reactions to her spiritual, Islamic, academic and social education in the four countries of her youth, sharing her mixed reactions of fervent religious devotion and her attempts to raise question. While totally committed to the Muslim faith, her attempts to question perceived inconsistencies in religious dogma and to move beyond the rote learning and chanting of the Koran (generally in largely incomprehensible Arabic) were mostly unmet and frowned upon. Her academic homework needs were also often frustrated. As the oldest daughter, she was expected to do most of the domestic cooking and cleaning for the family and her strict, Muslim mother showed no sympathy for her conflicting need for homework time, instead lashing out with the unprovoked fierce beatings that most females were taught to expect.

H
owever, this is not a story of resentment or tragic abuse. It is a story of insuppressible vitality, curiosity and determination to find an alternative to the life and expectations that she sees have trapped her mother - and many other women - in frustration and misery. Her reaction to the hypocrisy and suffering she sees around her is a mixture of puzzlement, defiance and compassion. Her spirit is never squashed and the odds she overcomes both during her early youth and after she escapes a forced marriage and finds asylum in the Netherlands, leaves me gasping with amazement and admiration. But most of all I am grateful for the understanding she has given me, through her direct experience and observation of other's experience, of how we can be persuaded to find refuge and deep faith in a religious expression that justifies our oppression.

A
yaan did not discover the depth of, and mechanisms supporting this oppression until she started mixing in a Western, secular, society and found that she was not struck down by Allah when she wore jeans instead of the all-encompassing Hidjab and the men in the street did not fall into a frenzy of passion and lust (as she had been told they would) if she exposed her ankles! As she uncovered the beliefs that had controlled her as a woman, she become a pioneering freedom fighter, dedicated to raising awareness of the situation of many oppressed Muslim women, both living in their original Islamic countries and in Western, developed countries where they sought refuge from war but continue to be oppressed by their fellow refugee spiritual communities. Her political voice has been strong enough to earn her the continuing enmity of reactionary Islamists and although she lives under a constant threat of violence, she refuses to be silenced.

H
er danger is real and her courage to speak her truth is inspiring. She feels so real to me that I list her amongst my family, teachers and special friends that I regularly pray for. As it says on Infidel's back cover, "No other book could be more timely or more significant at this particular time in history when Western governments are struggling to balance democratic ideals with religious pressures."