There are days when it all changes. Suddenly a new view is born! So there I was, basking in the sun and lazily contemplating a bird in the tree a little way from me. As I was enjoying its song and antics as it searched for food, I suddenly realised that the bird's perception of its environment and my perception were completely different. If it had eyeballed me, as I was eyeballing it, it would have perceived something quite different to my view of my body and the environment we were sharing. 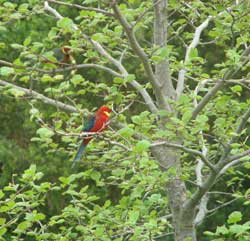 Its bird consciousness, different to my human consciousness, would have been almost unimaginably different. What does a small bird see with its eye consciousness? If food, mating and danger are its prime preoccupations, how are the vision, hearing, tasting, touching and smelling (if birds can smell) consciousnesses shaped to meet its particular needs?

And what are the mental perceptions facilitated by a bird's brain? Perhaps it is with regard to the feeling states of pleasant, unpleasant and neutral that we would experience most commonality? The commonality might be in the pleasant, unpleasant or neutral sensation, rather than the object eliciting such a reaction. I rather think that the bird's reactive feeling state to the taste of a juicy worm might be a bit different to mine! And then, again, it might not show the same interest as me in my cup of tea!

I can imagine that the bird's view of the tree in which it moves, and the leaves surrounding it, might have infinitely more detail than I perceive. No doubt a biologist would have a more accurate opinion on some of the aspects of bird consciousness, perception, feeling, predispositions and form, but it is not scientific differences that I am exploring here.

Similarly, the biologist, or the farmer, might have a different view of the cow I see peacefully grazing, or the wallaby and joey grazing just below the deck. 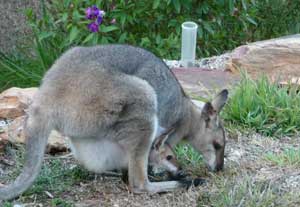 Certainly, the cow and the wallaby are experiencing their surroundings, and their beingness, in their own particular way that bears no resemblance to what I perceive.

My interest is in the sudden 'knowing' I experienced as I recognised the uniqueness and fleeting nature of my view. This view I am attempting to describe was not, in fact, 'my' view. What was most striking about the shift in perception was that 'I' was no longer centre stage. There was a deep, embodied recognition that the habit of viewing 'the other' in relation to 'me' was just a habit. What's more, it was a habit that supported the illusion of me as a separate self, perceiving everything else as separate entities.

However, we are but a perception in the mind of the perceiver! And all perceivers, whether of the same or different species, will perceive the apparent 'object' (maybe me!) differently. Not only does each being perceive differently, shaped by the peculiar characteristics of their sense consciousnesses, their particular bodily form and abilities, plus the influence of their environment in all its splendid complexity, but the object of its perception will be impermanent, interdependent with the causes of its beingness: an unbroken chain of cause and effect. With no beginning and no end, what we habitually perceive as separate beings are, in fact, interdependent and  empty of inherent existence! Not only will the object of perception be empty, the perceiver, too, has no separate, inherent existence.

I, too, am but a fleeting manifestation of a succession of impermanent perceptions as my sense consciousnesses react to the ever-changing flow of phenomena, all born of preceding causes that have no beginning and no end. So I, too, like all that I perceive, am empty of separate,inherent existence.

Wow! And all this from watching a bird and realising how its perception of me (if it saw me at all) would be different in every respect.

Have you any similar experiences to share? Times of insight when 'reality' changes? I'd love to hear them...

9 responses to “It's all about perception!”