We all have elements of narcissism – otherwise known as self-centred preoccupation and blindness to others – but is this a necessary defence against the hazards of life or is it the prime delusion that causes our suffering?

In Western psychotherapy these days the common emphasis is on strengthening self esteem and the evaluating ego. A strong ego has sufficient confidence not to be preoccupied with defending itself and can therefore develop interest, empathy and compassion for others. Another psychological ethic is to be non-judgemental. The client is ‘always right’. These professional ethics have been a necessary counter-balance to widespread discrimination based on religion, class, ethnicity, age and gender.

However, there is a risk that the psychotherapeutic relationship that focusses exclusively on the preoccupations, hopes, fears and desires of one person – the client – without the more usual reciprocity involved in social life, can encourage narcissistic tendencies if the therapist does not skilfully check for positive values congruence and probe for the consequences on others of the client’s actions and aspirations. While it is not for us (as therapists) to judge, it is our role to increase the client’s awareness of the bigger picture that surrounds them.

It is only when we appear as entirely self-centred that we are called narcissistic. Significantly, a strong narcissistic defence system appears to accompany much mental illness and consequently has supported the idea that it is indeed a defence triggered by poor attachment to the initial main caregiver or by intrusive, neglectful or abusive conditions in early childhood. “What narcissistic people all have in common is an inner sense and  terror of insufficiency, shame, weakness and inferiority… “Their compensatory behaviours might diverge greatly, yet they still reveal similar preoccupations” (Nancy McWilliams, 1994). Or, as Sydney-based, Jungian analyst, Neville Symington, describes in his book ‘Narcissism’: “the hated, vulnerable, dangerous state of being a child at the mercy of others is repudiated and the false, grandiose adult self, which is actually a caricature, is created” (Symington 1993). 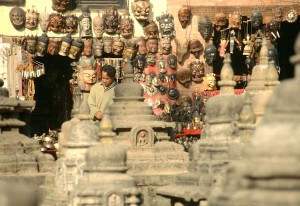 A Nepalese image of the many masks, or personae, we adopt

Symington’s description of the false, grandiose self as a caricature fits the Buddhist perception that all ideas of ourselves as separate, independent entities are a socially constructed fiction that have no substantial basis. Well, perhaps ‘fiction’ is a bit strong.

Essentially, the Buddhist teaching is that the nature of existence has two simultaneous faces: relative truth and absolute truth. In other words, we – and all that we observe – appear as separate but are actually interdependent with all that is and are therefore empty of separate existence. We experience the ego – and our sense of self – as a stream of thoughts, constantly judging and conceptualising what we see, hear, smell, taste or touch. There is a strong tendency for us to believe that this stream of thoughts is proof of “me”. However, when examined and analysed carefully, these same thoughts and feelings have been observed to be constantly changing (impermanent), impossible to separate from other (also impermanent) phenomena and are therefore empty of separate existence.

This conceptualising in our thoughts consequently overlays the perceived objects of our senses with learned associations that separate experience into subject (our sense of self) and object (everything else). These learned associations are always based on the past and are therefore likely to distort present appearances with what we often call negative or positive conditioning taught by our culture, previous experience and adopted belief systems.

This process is often easy to see when one travels to a new and very different culture with a different language and customs. The food considered desirable – and the reasons for this desirability – may seem very undesirable to us. The examples of eye balls, animals’ testicles and live witchety grubs come to mind! In some cultures dogs are seen as pets and valued human companions, while in others they are seen as food. There are, of course, many other examples of numerous different interpretations of what might empirically be observed as the same object.

The distorting effect of our conceptualising may seem a long way from the question of narcissism as a defence or a delusion. However, placing ourselves at the centre of the world – where ‘me’ always comes first is both narcissistic and explained in Buddhadharma as the grand delusion responsible for all our suffering. By continually focussing on our desires and fears, including the desire for life, we are trying to hold onto, or avoid, that which is constantly changing and impossible to control. The result is, at best, disappointment or frustration and, at worst, leads to hate, fear, insatiable greed and jealousy. And this is called suffering!

Narcissism is but a concept and, like all conceptualising, narcissistic interpretations and projections form a screen that separates and distorts the nature of reality. The concept of anatta – no self – in Buddhadharma is another concept but also a central Buddhist doctrine that is very complex and takes a lot of testing before it is fully understood.

Today I am offering only a little taste of these concepts of no separate self, versus narcissistic self-preoccupation, as an introduction to the three days of teaching I will be giving in Melbourne on February 24, 25 and 26 on behalf of Sophia College. Even this three days will only be a slightly larger taste of this central Buddhist teaching. If you are interested in this teaching, you can go to Sophia College’s website at http://Sophiacollege.com or ring 08 9726 1505.

Wishing you all well and happy,

One response to “Narcissism as defence or delusion?”