How do you find happiness in a smashed--or disease-filled-- body, wracked with pain? How do you find joy when you're reeling from the pain of losing a loved one?

Try using the power of ignoring! Allow the attention to slide away from the sensations and thoughts filled with pain and redirect the mind to an object (physical or mental) with strong associations of beauty, or joy, or love, or kindness or generosity-- or any of the emotions that feel good.

A few days ago I was fortunate to listen to a "Talking Heads" interview with Janine Shepherd, the young sportswoman training in cross-country skiing for the Winter Olympics, who was hit by a truck when cycling in Australia's Blue Mountains. What a woman! What courage! What wisdom and compassion she has found in the last two decades since the near-fatal accident that left her neck and back broken in seven places; five ribs and her arm broken; head injuries and abdominal injuries, resulting in paraplegia and severe pain that continues to this day.

Understandably, the road to emotional recovery and a new life included periods of despair and depression but the courage, strength of will, zest for life, compassionate interest in others and her pervasive optimism that she had developed in her childhood and youth as a top-level sportswoman were probably key ingredients in helping her find the way to an active, engaged and incredibly rich new life and identity. Within a year of lying helpless in hospital, she had learned to fly. One day, while still struggling with despair at the possibility of never walking again, she had looked out the window and seen a plane flying across the sky. Suddenly her heart lifted and she thought, "if I can't walk, I can fly!" And so that's exactly what she did. Despite the many objections of the aviation industry (based primarily on her disabilities), she succeeded--against the odds--in getting the necessary health clearances so that she could get a commercial licence, followed by an instructor's permit. Despite having one 'dead' foot, unable to work the pedals, she even became skilled in aerobatic flying! Later she added competitive riding to her list of achievements! 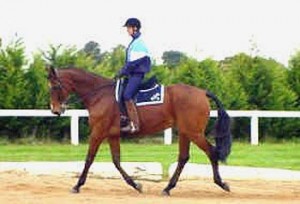 From my reading of her first book, "Never Tell Me Never", first published in 1994, and from the interview I listened to just recently, I believe that an important ingredient for her inspirational success has been her ability to use the power of ignoring to positive effect. In this interview I learned that (again against the odds) she has three children and spends much of her time as an inspirational public speaker, using her story and her wisdom and compassion to help others. Apparently she has now published three books and is frequently interviewed and invited to speak. However, it was her answer to one of Peter Thompson's (the interviewer) final questions, following all the footage showing her radiant energy, good nature and many achievements, that really struck me and prompted this piece of writing. He asked (as though he were reminding her) how she lived such a full and generous life when still suffering severe and constant pain from all her injuries. From memory, she replied something like: "I just don't give it attention! I will notice it and then I turn my attention to one of the many sources of joy in my life. I know that despite being able to walk and my apparent mobility, much of my lower body does not work and must be cared for manually (rather than automatically) but there is so much to appreciate and be grateful for in my life and this is where I turn my attention." This is what I call 'using the power of ignorance mindfully'!

When dealing with my own, much lesser, but also chronic nerve pain, I, too, have found the power of ignorance to be an effective 'pain killer'. Sometimes it is a struggle to wrench attention away from the pain and the 'poor me' and 'not fair' thoughts that make it worse, especially at night when one has been woken up by the pain. One method I have found helpful has been to share the attention with a healthy, pain-free part of my body, such as an arm, and to mindfully and progressively tense this arm while linking it with the stressed, tensed muscles of the painful lower back. I then use the control of the arm muscles and the ability to relax them to induce relaxation in the muscles I do not have conscious control of. Often this works on its own, but if not, moving my attention to my breath, or a mantra that requires some concentration, will usually do the trick of 'ignoring' the discomfort and thereby encouraging the body to relax and expand into the spaciousness of mind and then of sleep.

Another relatively small, but very useful, way I have used the power of ignoring has been to counteract the impulsive tendency to swipe and kill biting insects. For example, the other morning I was sitting on the verandah and I noted a tiny midge sticking its proboscis into my forearm. I decided to ignore the pain control impulse to kill or sweep it away. Instead, I wanted to reverse an apparent ever-increasing skin sensitivity that frequently distracted me and called out "danger! danger!" I also wanted to follow the precept of respecting and supporting all life. So I chose to ignore the skin's demand for action and I continued talking and drinking my morning coffee. It proceeded to sit there for over five minutes, growing considerably larger as it filled with my blood. I noted a raised, white 'bite' mark taking form around it and still I let it sit. Finally, when I was not looking, it flew away! I resisted (ignored) later urges to itch the bite and was surprised to notice that only two hours later the white bite mark had vanished and with it all irritation.

I have done the same with mosquitoes and noticed that if I allow them to take their fill there is little or no ensuing skin irritation. I find this interesting as it appears that when there is resistance the irritation is provided by mind but projected onto the body. If the conditioned mental impulse to resist is ignored and instead one freely gives to the visiting insect, the flesh follows suit!

We may be more used to the concept of mindful attention, or selective attention, but attention on one object always requires ignoring other mental or physical 'objects'. Most of us know about this from watching our mind in meditation and observing the many distractions that arise! Taking time to study the power of ignoring is very worthwhile. Let me know what you notice!

What has been your experience of the mental and physical effects of mindfully ignoring, resisting or accepting a conditioned impulse to act? Your comments and your experience is always welcomed.

If you are interested in reading Janine Shepherd's inspiring story of recovery against the odds in her book, "Never Tell Me Never," go to my list of recommended reading, found through the menu category at the top of the web page. If you buy any book from Fishpond or Amazon through clicking on 'Buy Now' buttons on our website, we get a small commission and that helps us keep going.

6 responses to “Pain Relief Through The Power of Ignoring”