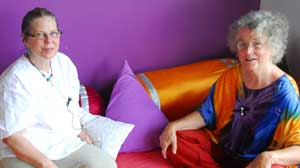 ShantiMayi, is the first westerner and woman in the ancient lineage of Indian Sacha Masters. ShantiMayi has a house by the Ganges in India and in the Pyrenees, plus centres in France, Germany, Denmark and Australia but she spends much of her time travelling around the world to her centres and to visit indigenous communities in remote parts of the world.

In this (40 minute) interview ShantiMayi speaks about some of the distinctive features of her ancient lineage, dedicated to shifting consciousness from ignorance to wisdom through opening the heart. She notes how she has students who identify themselves as Buddhist, Hindu, Christian or Shammanic but what all have in common is the interest and willingness to move through opening the heart. She is very clear that she is not a crutch but a light on the path that each of us has to walk for ourselves. She sees her role as 'putting out the form' and sharing the results of her continuous learning but "people have to move through their own passion".

ShantiMayi speaks of the world currently being under a shroud of fear that is being perpetuated by hidden sources that control through generating fear related to sexuality, sensuality and seperation, such as in the 'divide and rule' ethos. However, she also believes that a higher energy is arising, of dignity and respect, and that we all need to wake up and step into this energy and open our hearts.

In this interview, ShantiMayi uses a particular example of someone frozen by fear to suggest some ways for each of us to work with fear, whether it is based on physical danger or a fear reaction to negative judgement or ill will. Both in this individual example and in reflecting on the path of the heart, her emphasis is on the development of trust in our essential goodness and a commitment to developing an openess to whatever life brings. She speaks of self dignity and responsibility for our life and choices. Finally, she advises that this is an urgent time, marked with fear, but that this is a gift to urge us to stand in the dignity of respect and compassion.