My understanding around the teaching that there is 'no one right way' and that there are numerous paths to awakening, continues to unfold.

A week ago, I was deeply moved by the devotional singing and devotional attitudes and mudras of the thousands of people paying their respects to the divinity and guru perceived at the Golden Temple of Amritsar. The beauty of the architecture and the holy lake the temple stands in was matched by the beauty of the men, women and children respecting, bathing and praying in the sacred space of the temple and it's waters. Beautiful, melodious sounds were added as prayers were continuously sung and broadcast over loudspeakers, further complimented by the crowd around me joining in at their favourite verses.

We appeared to be the only westerners present but we felt completely accepted and belonging amongst the throng of women, in beautiful saris and colour-coordinated veils, and the men with their turbans or head scarfs. We felt the truth of 'all beings are equal' and we rejoiced in our common humanity and devotion to the sublime.

And now we are in McLeod Ganj, the centre for Tibetan refugees and their leader, the Dalai Lama. Our hotel is perched high on the edge of the foothills of the Himalayas, looking down on the village below and the monastery of the Dalai Lama and the numerous monks and nuns living here. 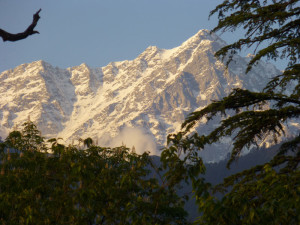 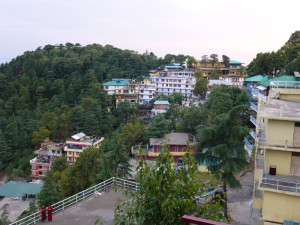 View from our hotel balcony

Yesterday we visited the main temple and were astonished at the huge numbers of lay Tibetans (easily identifiable in their traditional dress) surrounding equally impressive numbers of monks chanting their puja in Tibetan. Together, these Buddhist devotees presented another spectacle. But what surprised me was that - despite being a practitioner of Tibetan Buddhist teachings for over thirty years - I did not initially feel I belonged.

Was it the language? Yes, partly. But it was also the form of practice. Chanting seemingly endless prayers in a language I do not understand (or perhaps in any language) is not my thing. Not a useful path for me.

Curiously though, on other days when I have gone to the temple I have quickly blended in and felt very much part of the whole. The difference seems to be whether the people are being led in a service and language I can't understand or we are all doing our own thing. The murmuring of numerous mantras - a low buzz of private prayer - provides a powerful ambience of devotion to participate in.

What works for me is meditation, in both sitting and walking forms. This is the path I walk each morning, taking about an hour

What definitely works for me is joining a steady stream of monks, nuns and lay people, all walking the sacred path around the Dalai Lama's temple, monastery and residence, and all quietly murmuring their mantras. It is enormously supportive to be chanting the mantra, accompanying the sadhana I am currently practicing, in such an environment. It is also a delight to feel free to use my mala anywhere, without attracting any negative attention. Numerous mantras on rocks and stones along the pathway

Ah! The delights of multi-coloured Sanskrit sacred syllables painted on stones and rocks, massings of prayer flags, rows of prayer wheels and beautiful path side shrines.

What is interesting to me is that coming here to what might be described as the Buddhist equivalent of what Rome is to Catholics, has really brought to my attention how individual each person's reading is of any teaching and spiritual tradition and how the essence of a teaching is not in the rituals and external structure but in the heart opening and wisdom ripening effect of the chosen spiritual practice. Gompa on temple path below the Dalai Lama

So from my Catholic origins, signified by this 19th century church below that we visited, I notice the spiritual decorations around my adult spiritual practice have become more flamboyant, while I have gradually learned to distinguish and drop the 'church' and structured group rituals of both Christianity and Buddhism. Sitting on the steps of St John's in the Wilderness

One of the delights of being here in India - and in particular - Dharamsala - is the sense of all religions practicing side by side in this wonderful world of ours. The hotel we are staying in is run by a delightful pair of Muslims; we were blown out by the strength, beauty and inclusiveness of the The Tibetan spiritual stalls attract a flow of attention from Hindus, Sikhs, Christians and Buddhists

Sikhs in Amritsar; we visited the catholic church above in the company of many Hindu families and the temple and streets here are shared by people from many of the religions and spiritual traditions of the world. 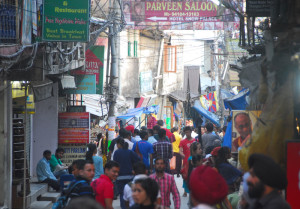 It is impressive to notice how India has so generously provided refuge and freedom to the people of Tibet and has allowed them to set up and develop an alternative government in exile. It is also very satisfying to see the many Indian Hindus who come here in a steady flow to sample the flourishing industry of largely Tibetan Buddhist rupas, thankas, spiritual practice aids - such as malas, bells and minature prayer wheels - and, of course, jewellery,  clothes and food.

Long live respect for the many and varied spiritual paths we all take!

PS: You may like to read Alan's stories of some of our experiences  here.

5 responses to “So many paths to unfolding!”