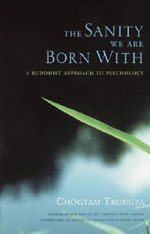 "The Sanity We Are Born With: A Buddhist Approach to Psychology" by Chogyam Trungpa

This is the second in my series reviewing some of the works of Ven. Chogyam Trungpa, the Tibetan Buddhist meditation master, scholar and founder of the Naropa Institute in Boulder, Colorado, U.S.A.

T
oday I shall review 'The Sanity We Are Born With: A Buddhist Approach to Psychology' by Chogyam Trungpa. In this book Chogyam Trungpa presents key Buddhist ideas about the mind and how the underlying goodness and healthiness that constitute the basic sanity of all people can be uncovered and brought to awareness.

F
ollowing an introduction discussing the meeting of Buddhist and Western Psychology, the book is loosely divided into three parts: Meditation, Mind and Psychology. In the first part, focussing on meditation, he underlines the importance of getting to know how we function as human beings - studying our nature at both the relative and absolute level. He believes the increased awareness gained through the experience of the Four Foundations of Mindfulness (monitoring body states; feeling states; concepts and mind states) is as important for the psychotherapist as it is for those in the client role.

H
e skillfully weaves instruction on meditation practice and its many benefits throughout the book and frequently emphasises the importance of an open, flexible mind that is curious, awake and compassionate to self and others. His simple and direct instructions on how to practice are explicitly free of the goal orientation and emphasis on "getting it right" that are so dominant in Western cultures. Instead, he shows how the increase of awareness and acceptance of what is, through the experience of meditation practice, also meets the goals of psychotherapy.

I
n Part Two, on 'Mind', Chogyam Trungpa presents the Buddhist perspective on the nature of mind and the development of ego. He clearly describes how the ego is progressively constructed and made to feel real in its seperate existence as it identifies with the skandhas (form, feeling, impulse, concept, consciousness) in both a developmental and cyclical fashion. The confusion and suffering caused by clinging to the skandhas is then further complicated by our preoccupations, or self-hallucinations, of the emotions and psychological states characterising the six realms of existence.

I
n exploring the nature of the six realms, Chogyam Trungpa draws together the disciplines of meditation and psychotherapy, clearly outlining the benefits and shortcomings of each in working with the six psychological states that characterise each 'realm' of existence. Briefly, the god realm manifests as bliss and spiritual materialism (or grasping); the jealous god realm as jealousy and restless lust for entertainment, action and competition; the human realm as passion and desire; the animal realm as ignorance; the hungry ghost realm as poverty and possessiveness; and the hell realm as aggression and anger. All counsellors and psychotherapists will be able to identify these generally habituated patterns of thoughts, behaviors and emotions in themselves and in their clients. I certainly can!

T
he "Psychology" section presents a number of the lectures given to psychologists and to his own students about the application of meditation to therapy and how psychotherapy should be conducted. He proposes that "the basic work of health professionals in general, and of psychotherapists in particular, is to be become full human beings and to inspire full human-beingness in other people who feel starved about their lives".

S
o there are some rich teachings on how to become a "full human being"; how to create an environment supporting our basic sanity; how to work with death and dying and, above all, how to permeate the space with loving kindness, both in one-to-one relationships and in a group context. He expresses great confidence in the powers of loving kindness and spacious awareness to promote healing even in cases of severe mental illness, including people suffering from psychotic states and histories of severe abuse.

H
e recognises that mental illness and the experience of severe abuse are often accompanied by deep mistrust and resentment of the world and discusses at length how to work with this aggression towards self and other. Essentially, he argues that "the key point in overcoming aggression is to develop natural trust in yourself and in your environment", and so he presents ways of supporting this trust and loving kindness.

O
verall, this book has developed my understanding on the development of the ego, showing how and why we cling to the notion of seperate existence. It has clarified the place of meditation in a therapist's life and work, and has really helped me work with the process of cycling through the six realms of existence, on both a daily, and life-to-life level, understanding at a deeper level my own experience of the destructive emotions of anger/hate; greed/lust; ignorance, desire, doubt, jealousy and pride so that I can work more skillfully with the psychotherapeutic management of these emotions in others.